As you know, the PowerShell team just released the new PowerShell version called PowerShell 7. PowerShell 7 will brings a couple of new features and enhancements not only for users who used PowerShell Core 6 but also for people who are currently using Windows PowerShell 5.0. I want to quickly give you an overview of what’s new in PowerShell 7.

There are many enhancements in PowerShell 7 to make it the best PowerShell version yet. It is almost impossible to list all of them in one single blog post, so I will focus on the once, which are the most important once for me.

Out-GridView, -ShowWindow and other GUI cmdlets are back on Windows

With .NET Core 3 brining back WPF support on Windows, the PowerShell team was able to bring back some of the popular graphical tools and cmdlets like Out-Gridview, Show-Command, and the Get-Help -ShowWindow.

Since I started using PowerShell and get into working with objects, ForEach-Object was one of the most critical cmdlets. By adding the -Parallel parameter to the ForEach-Object cmdlet, you can execute a scriptblock in parallel, similar to the option we had with PSWorkflow. With that performance can get so much better if you are working with a broad set of objects. You can also optionally set the maximum threads, which will be used in parallel (the default thread count is set to 5) with the -ThrottleLimit parameter.

With Windows PowerShell, we got cmdlets to interact with the clipboard. Since we moved to a cross-platform version, we lost these cmdlets. Now they are back! You can use Get-Clipboard and Set-Clipboard on Windows, Linux, and macOS. Currently, only text is supported, and on Linux, xclip is required.

You can again use the Get-Counter cmdlet to get Windows performance counter information.

With the Out-Printer cmdlet, you can send a PowerShell object to the printer (Windows only). This also works with PDF printers in Windows 10.

On Windows, you can now use the Clear-RecycleBin cmdlet to empty the Windows recycle bin.

The Test-Connection cmdlet got updated to give you a more consistent experience between Windows PowerShell and PowerShell 7.

Null assignment and coalescing operators (?? and ??=)

With the new ?? null coalescing operator to get the value of a statement if it’s not $null or return something else if it is $null. And with the new ??= null conditional assignment operator, you can easily assign a variable a value, but only if the variable is $null.

Thanks to .NET Core 3, the Get-Hotfix cmdlet is back in PowerShell 7. Get-Hotfix gets hotfixes and updates that are installed on a local or remote computer.

You might remember my blog on how you can use Select-String in PowerShell, just like grep on Linux. Now with PowerShell 7, Select-String just got improved and added emphasis to highlight the text in a string that matches the selection criteria.

I am working with PowerShell for a while now, and when you get an error, all the red text and information can be overwhelming. I am happy that PowerShell 7 addresses that with the new ConciseView for errors. The $ErrorView preference variable allows you to change how errors are formatted. Before, we just had NormalView (the default view) and CategoryView.

The new ConciseView tries to return just the relevant error message, without the additional noise.

Therefore the PowerShell team added a new cmdlet called Get-Error, which will, by default, will provide you with a formatted view of the most recent error, including showing specific nested types like Exceptions and ErrrorRecords making it easier to troubleshoot.

PowerShell 7 GA will also be our first Long Term Servicing (LTS) release, which is a change from the current Modern Lifecycle support for PowerShell Core 6. PowerShell 7 will be supported for as long as .NET Core 3.1 is supported.

How to install and update PowerShell 7

PowerShell 7 is an additional installation to Windows, macOS, or Linux. You can download PowerShell 7 from here. If you are looking for an automated way of installing and updating PowerShell 7, check out my blog post.

I hope this blog gave you a great overview of what’s new in PowerShell 7. What is your favorite feature or enhancement in PowerShell 7, please let me know in the comments. By the way, if you are a Windows 10 user, you should also definitely try out the new Windows Terminal.

Thomas works as a Senior Cloud Advocate at Microsoft. He engages with the community and customers around the world to share his knowledge and collect feedback to improve the Azure cloud platform. Prior joining the Azure engineering team, Thomas was a Lead Architect and Microsoft MVP, to help architect, implement and promote Microsoft cloud technology.   If you want to know more about Thomas, check out his blog: www.thomasmaurer.ch and Twitter: www.twitter.com/thomasmaurer
← Previous Story
AZ-204 Study Guide: Developing Solutions for Microsoft Azure
→ Next Story
How to use PowerShell ISE Mode in Visual Studio Code 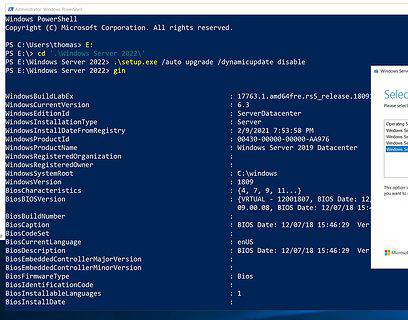 How to In-place upgrade Windows Server in Microsoft Azure

6 Command Line (PowerShell & CLI) Tips & Tricks for Microsoft Azure you should know about!

There are many experiences and possibilities to manage your Microsoft Azure resources, one of them being the command line experience using...
Read More →

Many Windows Server Administrators are being confronted with application modernization. Often new applications are architected on...
Read More →

6 Replies to “What’s new in PowerShell 7”