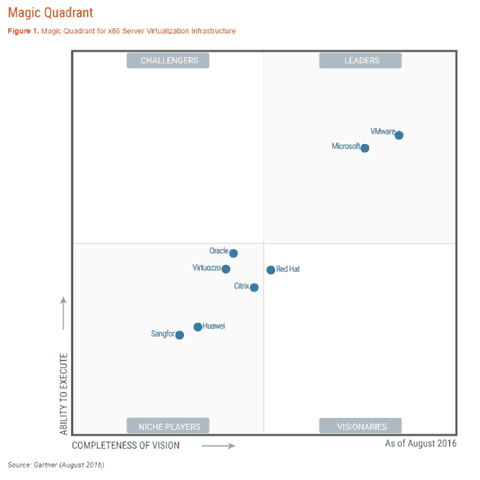 Year over year Microsoft is named as a leader in the Gartner x86 Server Virtualization Infrastructure Magic Quadrant and it gets closer and closer to VMware. Microsoft now is named again as a leader in Gartner x86 Server Virtualization Infrastructure 2016 Magic Quadrant. Especially the integration with System Center and Microsoft Azure as well as the new security features in Windows Server 2016 Hyper-V, makes Hyper-V a strong player in the hypervisor space. Check out the Microsoft Blog post for more information or my blog post about What’s new in Windows Server 2016 Hyper-V.

Gartner published the Gartner x86 Server Virtualization Infrastructure MQ with Microsoft landing in the Leader Quadrant for the sixth year in a row. Microsoft moved up in the ‘ability to execute’ and to the right in the ‘completeness of vision’ assessment compared with 2015. Gartner defines leaders as having a clear strategy and roadmap for offerings, understanding virtualization’s role in infrastructure and operations transformation, and having a clear vision with respect to private cloud, hybrid cloud and public cloud computing.

Microsoft offers you to have a look at the Gartner Document here: