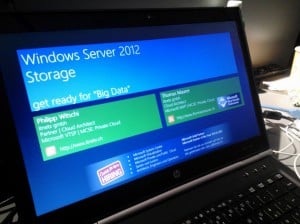 Last Friday I had two session at Geekmania 2012, a the conference for real geeks. Together with other architects and engineers of itnetx we were presenting lot of cool stuff around Microsoft Virtualization and Systems Management at Level 400.

In my two sessions me and Philipp Witschi from itnetx talked about the new Windows Server 2012 Hyper-V features like Hyper-V Replica and in the second session I focused on Hyper-V over SMB, showing new features and possibilities of SMB 3.0.

A great thing to see was the full cinema hall (around ~120 people) during the Hyper-V and Windows Server 2012 Storage session, which shows the great interested in Hyper-V.

I hope people could learn something new and enjoyed my sessions and Geekmania 2012. It was great to talk to a lot of people about the new Hypervisor. 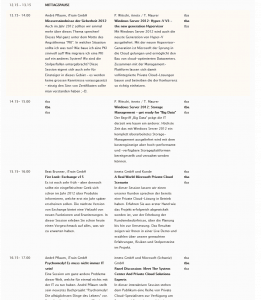 If you enjoyed my sessions I hope you will attend my session about System Center Virtual Machine Manager 2012 SP1 on the Swiss TechDays during 19.11. and 20.11. in Basel.