When you are having configured a Hyper-V over SMB configuration, which means the virtual machines are running on Hyper-V host and are stored on a SMB file share, and you try to manage the virtual machine remotely from Hyper-V Manager or Failover Cluster Manager, you will run into access denied errors. The same error can also happen if you try live migrate the virtual machine. This error is caused because you are using the credentials from the machine which Hyper-V or Failover Cluster Manager is running on to access the file share via the Hyper-V host. This “double-hop” scenario is not by default not allowed because of security reasons. You can find more about Kerberos Authentication on TechNet.

On your management box or where ever you want to configure SMB Constrained Delegation you have to install the Active Directory PowerShell module. (You don’t need the module on the Hyper-V host or SMB file servers)

Now you can use the following cmdlets.

For example if you are running a two node Hyper-V cluster and you use a Scale-Out File Server cluster (SOFS01) as virtual machine storage, the configuration could look like this.

And as I mentioned before you can also use System Center Virtual Machine Manager (VMM) to manage your storage, which uses a different approach and does not need the configuration of Kerberos Constrained Delegation.

Thomas works as a Senior Cloud Advocate at Microsoft. He engages with the community and customers around the world to share his knowledge and collect feedback to improve the Azure cloud platform. Prior joining the Azure engineering team, Thomas was a Lead Architect and Microsoft MVP, to help architect, implement and promote Microsoft cloud technology.   If you want to know more about Thomas, check out his blog: www.thomasmaurer.ch and Twitter: www.twitter.com/thomasmaurer
← Previous Story
Veeam Hyper-V 2012 R2 Webinar recording available
→ 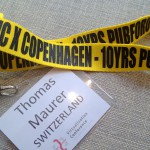 Next Story
Speaking at E2EVC 2014 Brussels