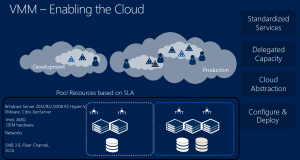 System Center – Virtual Machine Manager is used to manage your cloud environment, from compute, storage, networking up to virtual machines and services. So the product focus is on the following points:

This are the same point I already mentioned in my blog post “The Definition of Cloud Computing“.

Fully Manage Windows File Server – In Virtual Machine Manager 2012 R2 you can now fully manage not only third-party vendor storage over SMI-S you can now manage Windows file shares for a Hyper-V over SMB deployment. You can also manage Storage Pools and Storage Spaces.

VMM library ODX support – In SP1 VMM used BITS to deploy new Virtual Machines from a template from a VMM library. In System Center 2012 R2 Virtual Machine Manager, VMM now used the SMB to copy templates from the library to the host, which also allows to use ODX (Offload Data Transfer) to offload the copy job to the storage array if this feature is available.

Shared VHDX Support for Guest Clustering – Hyper-V 2012 R2 made a new feature available called Shared VHDX which allows a VHDX to be used by multiple VMs at the same time. This is great for guest clustering inside VMs. VMM does support this features and allows to use this feature in services templates.

Managing top of the rack switch compliance – System Center 2012 R2 Virtual Machine Manager can communicate with switches from different vendors and can be used to monitor the ports and VLANs on the switch. This is great for troubleshooting

IP Address Management – VMM 2012 R2 integrates in IPAM which is comes with Windows Server 2012 R2. This allows you to create new Logical Networks inside VMM from IPAM or to get networks from VMM into IPAM.

If you want to know more about System Center 2012 R2 Virtual Machine Manager checkout the latest session from Vijay Tewari at TechEd NA on channel9.