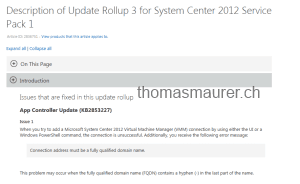 Which fix the following issues:

If we do not think about System Center Orchestrator we have basically two solutions to fully upgrade our Hyper-V clusters first is the System Center Virtual Machine Manager Fabric Patching which is available since System Center 2012. The second one is a new one called Cluster Aware Updating which is included in Windows Server 2012.

Both solutions do basically the same thing and using the same concept:

This is basically what both solutions are doing, but there are small differences between them and both have advantages and disadvantages.

Both solution do a great job and can of course be extended by using Windows PowerShell, System Center Orchestrator or third-party products.

The two main differences are Windows Server 2012 Cluster Aware Updating is definitely the newer solution with extensibility for third-party solutions with support for other cluster roles not just Hyper-V. Where System Center Virtual Machine is the clear winner, is where you have security roles in place and you need logs and other security features. And System Center Virtual Machine Manager has also a connection to System Center Operations Manager which lets you set Hyper-V nodes to maintenance mode.

Some days ago System Center Universe DACH/Europe was announced and finally we got more information on the event it self.

Finally the event will be a two day event on September 16th/17th 2013 in Bern Switzerland. There will be sessions in 4 parallel tracks, 2 Keynotes (day 1 and day 2) and approx. 36 Breakout sessions with a lot of System Center and Windows Server specialist, Microsoft MVPs and Microsoft employees as speakers.

Issue 2
A virtual machine cannot start after migration from Windows 7 to Windows 8 when the DiscardSavedState method is used.

Issue 8
Static IP pool that has the first address in a subnet fails for external network type.

Issue 9
VMM crashes during host refresher when VMM is unable to create a CimSession with the remote host.

Issue 11
The administration user interface crashes with a NullReferenceException error when you click Remediate on a host instead of a virtual network adapter.

Issue 12
The Virtual Machine Manager user interface displays a network adapter in a “Not Connected” state.

Issue 13
The Virtual Machine Manager stops responding with high CPU usage for five to ten minutes when you configure a VMND that has 2,000 network segments.

Issue 14
The host virtual network adapter property for a management adapter does not show port classification.

Issue 15
Live Migration fails at 26 percent when the network adapter is attached to an
isolated virtual machine network.

Issue 16
The Virtual Machine Manager Service crashes when a virtual machine that does not have a port profile is migrated to a cluster by using a logical switch that has a default port profile set.

Issue 18
The Host refresher crashes for any host that has the RemoteFX role enabled.

Issue 19
The minimum memory for dynamic memory greater than 32GB is a security risk.

Issue 20
The status of the network adapter is displayed as Not Connected in Virtual Machine Manager.

Thanks to Michel Luescher (Consultant Microsoft Switzerland) for the info.

Today I run in to the problem where I could not remove a Hyper-V Hosts from System Center Virtual Machine Manager. The Hyper-V host was reinstalled before he was removed from SCVMM and the host was showing has HOSTNAME (pending) in the SCVMM Management Console. If you did a right click to remove the host, the Remove option was greyed out.

But don’t worry Windows PowerShell came to the rescue, with the following command you can remove the Hyper-V host from Virtual Machine Manager.

As System Center 2012 SP1 was released, it officially supported VMware vSphere 4.1 and 5.1, there was no support for vSphere 5.0 in SCVMM 2012 SP1. Now since a lot of customer have requested this feature, Microsoft added VMware vSphere 5.0 to the supported list of vSphere versions. For those who didn’t know that, to manage VMware ESX Hosts you need a version of vCenter. Some months ago I made a blog post about how you can add your VMware infrastructure to Virtual Machine Manager.

Virtual machine hosts and host clusters that run any of the following versions of VMware: