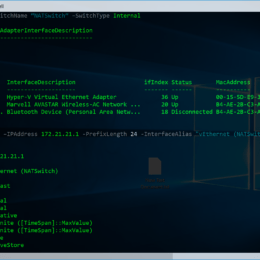 Set up a Hyper-V Virtual Switch using a NAT Network

A couple of months ago, I wrote a blog post about how you can create a new Hyper-V NAT Switch. Now, this worked fine in some early Windows 10 builds, but Microsoft removed the parameter for the NAT Switch in some Windows 10 Insider builds. You can find more about the Hyper-V Virtual Switches on Microsoft Docs. In the latest versions in the Windows 10 client operating system, Microsoft already includes a “Default Virtual Switch”, which allows you to use Hyper-V NAT Networking, without doing any configuration changes.

Set up a Hyper-V NAT Switch 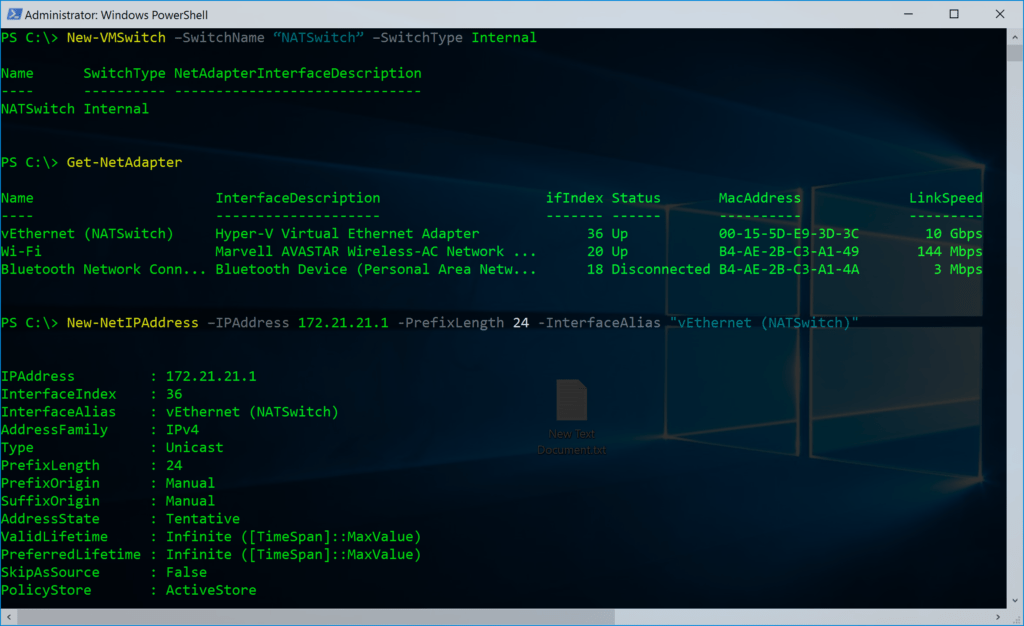 This configures the Virtual Network Adapter which was created while creating the Internal Virtual Hyper-V Switch.

Now you can configure the NAT rule 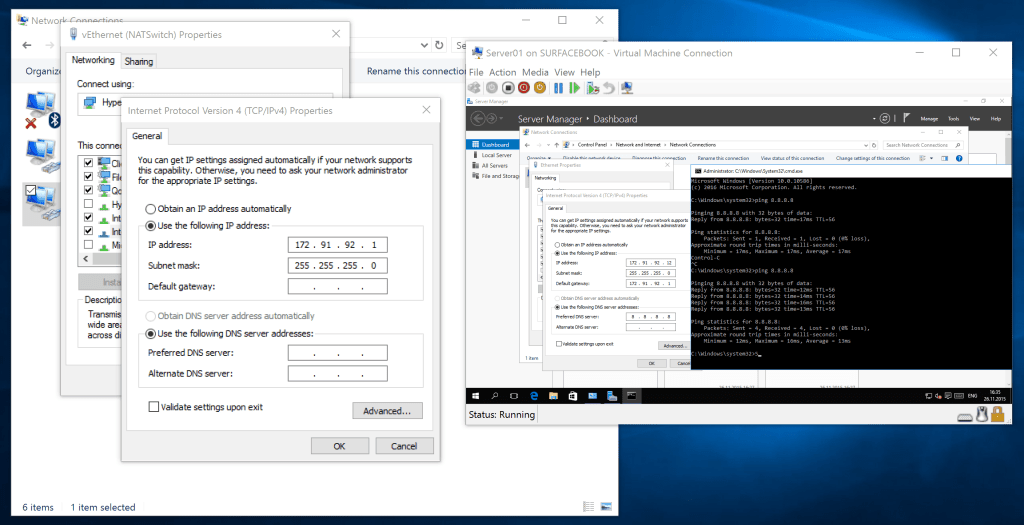 To forward specific ports from the Host to the guest VMs, you can use the following commands.

This also works with Windows and Hyper-V Containers. I hope this gives you a good overview of NAT Networking and the Hyper-V NAT Switch. If you have any questions, feel free to leave a comment. 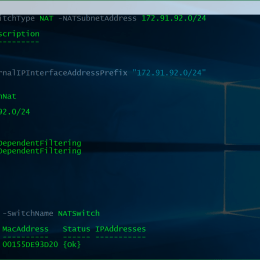 Set up a Hyper-V Virtual Switch using a NAT Network

In the latest Windows 10 build 10586 (Threshold 2) and Windows Server 2016 Technical Preview 4, Microsoft included a great new feature which is NAT mode for the Hyper-V Virtual Switch. This was mostly build for Windows Containers scenarios, but also has great value for Client Hyper-V. As of today Hyper-V had 3 different VMSwitch types called, Internal, Private and External. With the latest releases of the Windows 10 and Windows Server 2016 Technical Preview 4, Microsoft included a new VM Switch Type called NAT, which allows Virtual Machines to have a Internal Network and connect to the external world and internet using NAT. This feature right now is not included in the UI but you can use PowerShell to create the NAT Virtual Switch.

To forward specific ports from the Host to the guest VMs you can use the following commands.

This also works with Windows and Hyper-V Containers.

As many of the people mentioned, the option of the SwitchType NAT is gone in the latest Windows Insider Preview builds of Windows 10. If you have created a NAT Switch in Windows 10 before the upgrade to a Windows 10 insider build, the switch is still working. There is no comment at the moment from Microsoft on this. But Microsoft announced Hyper-V Container support for Windows 10, and since the NAT Switch makes totally sense when you are using containers, I guess the SwitchType for NAT will be coming back.

With the latest Windows 10 Insider Build 14332, I saw some Container Network PowerShell cmdlets, which maybe will replace the Hyper-V Switch NAT cmdlet options for the future. But this is just guessing.

Here is a updated version how you can configure the Hyper-V NAT Switch in newer Windows 10 and Windows Server 2016 builds.

Have fun and enjoy! Thanks to Ben Armstrong (Microsoft VirtualPCGuy) for the info.