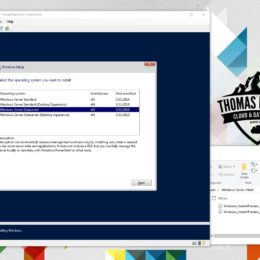 Which Windows Server 2019 Installation Option should I choose?

To compare the different Windows Server 2019 editions, check out the Microsoft Docs. 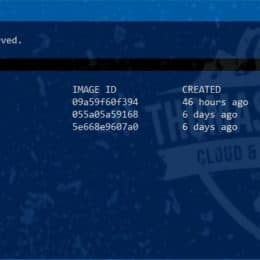 With the release of the latest Windows 10 Insider Preview (Build 17704), you can now download a preview of that container image. Your container host will need to run at least on the Windows Insider build 17704.

The IT world is transforming and Microsoft can see a huge demand by customers for containers. However the container images available today, Nano Server and Windows Server Core are lightweight versions of Windows and not including some of the components of Windows. A huge scenario for containers is to put legacy applications into containers. With the new Windows container image, Microsoft is offering a new option for applications who need more components which are not included in Windows Server Core, like DirectX or proofing support.

As of today, Microsoft offers 3 container images in preview:

Getting started with Windows Containers

First you need to have a host running Windows Insider Preview Build 17704 or higher. After that you can simply use docker to get the latest Insider container images from the Microsoft Container Registry:

You can read more about the new Windows Container image here on the Microsoft Virtualization Blog. 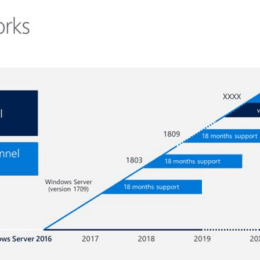 A couple of weeks ago at the Microsoft Build Conference, Microsoft released some new information about what is coming in the next version of Windows Server like Linux support on Hyper-V Container and much more. Today Microsoft just announced some new details about the next Windows Server releases and how they will work. The biggest change of todays announcement that Windows Server and System Center will also move to the Semi-annual Channel, just like Windows Client and Office moved to the Semi-annual Channel release cycle. The other large announcement is that Microsoft focuses Nano Server on Container and will remove support Nano on Hosts and Virtual Machines. This means you can run Nano Server only as a Windows or Hyper-V Container.

Nano Server is only supported as a Container Image

Microsoft is removing support for the Nano Server operating system running on physical hardware or inside Virtual Machines. Nano Server will be only supported as a Container Image. Windows Server Core will be the preferred installation option for your infrastructure servers like Hyper-V or Storage Spaces Direct.

This next release will focus on making Nano Server the very best container image possible. From these changes, customers will now see the Nano Server images shrink in size by more than 50 percent, further decreasing startup times and improving container density. As part of this effort to focus on containers, we will be removing the functionality for infrastructure-related roles. Instead of using Nano Server for these scenarios, we recommend deploying the Server Core installation option, which includes all the roles and features you would need.

There will be two primary release channels available to Windows Server customers, the Long-term Servicing Channel, and the new Semi-annual Channel.

The Long-term Servicing Channel is the release model you’re already familiar with (currently called the “Long-term Servicing Branch”) where a new major version of Windows Server is released every 2-3 years. Users are entitled to 5 years of mainstream support, 5 years of extended support, and optionally 6 more years with Premium Assurance. This channel is appropriate for systems that require a longer servicing option and functional stability. Deployments of Windows Server 2016 and earlier versions of Windows Server will not be affected by the new Semi-annual Channel releases. The Long-term Servicing Channel will continue to receive security and non-security updates, but it will not receive the new features and functionality.

The Semi-annual Channel releases will deliver new functionality for customers who are moving at a “cloud cadence,” such as those on rapid development cycles or hosters keeping up with the latest Hyper-V investments. Windows Server products in the Semi-annual Channel will have new releases available twice a year, in spring and fall. Each release in this channel will be supported for 18 months from the initial release.

Most of the features introduced in the Semi-annual Channel will be rolled up into the next Long-term Servicing Channel release of Windows Server. The editions, functionality, and supporting content might vary from release to release depending on customer feedback.

The Semi-annual Channel will be available to volume-licensed customers with Software Assurance, as well as via the Azure Marketplace or other cloud/hosting service providers and loyalty programs such as MSDN.

At Microsoft Build, Microsoft also announced that Windows Server will be part of the Windows Insider Program, and you will see the first preview builds this summer.

in the first Semi-annual Channel release from System Center, the team will focus on System Center Operations Manager, Virtual Machine Manager, and Data Protection Manager. The key areas of investment will include support for Windows Server and Linux, enhanced performance, usability and reliability, and extensibility with Azure-based security and management services. Which will bring features like Nested Virtualization support, software load balancing, Storage QoS Self-Service and management support for heterogeneous environments with improved Linux monitoring using a FluentD agent as well as VMware backup. System Center Configuration Manager will continue to offer three releases a year to give you the latest updates for managing servers, PCs, and mobile devices.

This changes will improve the release cadence of datacenter and cloud innovation dramatically. Customers like service providers will have the chance to update their offerings much more often which allows them to add new features and functionality. But there is choice for customers who need a stable and not fast moving environment they can deploy builds from the Long-term servicing channel, which will have long term support. With that you should be able to choose the best solution for your environment and workload. 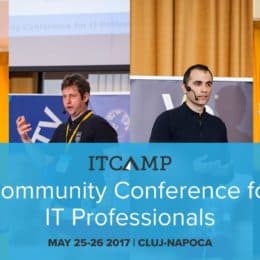 Speaking at ITCamp 2017 in Cluj-Napoca

This week I am speaking at MMS MOA 2017 in Minneapolis and I am proud to announce that I will speak next week at ITCamp in Cluj-Napoca, Romania, for the second time after 2016. I already was speaking at the ITCamp 2016 and I am happy to be a speaker again this year. You will find a lot of interesting topics and experts to talk to.

In two sessions I will talk about:

The best of Hyper-V

Windows Server 2016 Hyper-V introduced a huge amount of new features. Come to this session to learn about what we have actually been doing with Window Server 2016. Gain insight into what features and functionality you can utilize quickly to get an immediate benefit from using Hyper-V on Windows Server 2016.

Join this session for The Best of Windows Server 2016 — The New Foundation of your Datacenter. You’ll get an overview about the new, exciting improvements that are in Windows Server 2016 and how they’ll improve your day-to-day job. In this presentation Thomas Maurer (Microsoft MVP) will guide you through the highly anticipated innovations including: •Hyper-V 2016 features •Nano Server •Storage Spaces Direct •Storage Replica •Windows Server Containers •And more!

Hopefully see you there! 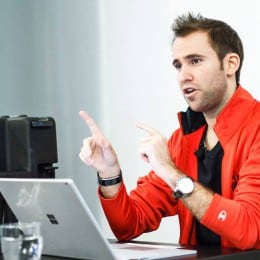 Speaking at the Midwest Management Summit 2017

I am proud to travel to the US tomorrow to speak at the MMS MOA 2017. The Midwest Management Summit is held in the Mall of America in Minneapolis and I have been there speaking for the past 3 years now from the first one at MMS 2014, second one at MMS 2015 and the last one just last year at MMS 2016. I am proud to be select as a speaker again this year.

The Midwest Management Summit is a 4-day conference purposely capped to just 750 attendees so that nobody gets lost in the crowd. Speakers have time to meet and talk to you. No rushing people out of a session to get the next speaker going. Time to absorb what you see and talk it over with speakers and other attendees. A true learning experience. Real networking. Real-life issues discussed.

This year I will be speaking in 3 different sessions mostly about Windows Server 2016, Nano Server, Hyper-V, Azure and Containers. And I am also proud to speak together with Samuel Erskine (Microsoft MVP) and John Joyner (Microsoft MVP). We have some exiting new stuff to share with the attendees, hopefully see you in the Mall of America!

Join this session for The Best of Windows Server 2016 – The New Foundation of your Datacenter. You’ll get an overview of the new, exciting improvements that are in Windows Server 2016 and how they’ll improve your day-to-day job. In this presentation Thomas Maurer (Microsoft MVP) will guide you through the highly anticipated innovations including: Hyper-V 2016 features, Nano Server, Storage Spaces Direct, Storage Replica, Windows Server Containers, and more!

Getting Started with Windows Containers, Docker and Azure 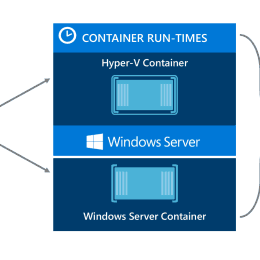 Windows Server news from Microsoft Build 2017 – It is all about Container!

Microsoft is just running their annual Developer Conference call Build with some interesting news for developers on Azure, Database Servers, Visual Studio, PowerShell, .NET and much more. But Microsoft also had some interesting things to share about the future of Windows Server. In a blog post, Erin Chapple, General Manager Windows Server, shared some information what Microsoft is doing in the Windows server space and about the next first feature release which will be aligned with the Windows 10 Client Operating System and will be released this Fall.

Container-optimized Nano Server – The Windows Server team has closely partnered with he .NET Team to bring the .NET Core 2.0 work to Windows Containers with an optimized container image based on Nano Server. This will reduce the footprint of the .NET container image by 50 percent, which will also reduce startup time as well as density improvements.

Container Storage – In Windows Containers you could use locally mounted volumes to store persistent data. As another investment in Containers, Microsoft is adding the ability to map SMB file-based storage directly into a container. 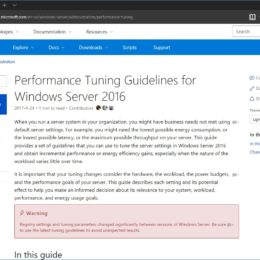 It is important that your tuning changes consider the hardware, the workload, the power budgets, and the performance goals of your server. This guide describes each setting and its potential effect to help you make an informed decision about its relevance to your system, workload, performance, and energy usage goals.