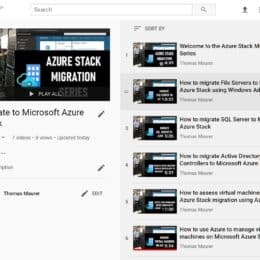 Learn about Azure Stack Migration in this Video Series

Together with Tiberiu Radu from the Azure Stack Product Group, I worked on a series of videos to show how you can migrate workloads to Microsoft Azure Stack. This includes basic workloads like Active Directory Domain Controllers, File Servers, and SQL Servers. We are not only adding videos about Azure Stack Migration, but we also added a couple of tips on how you can take advantage of some of the infrastructure-as-a-service (IaaS) features on Azure Stack, like Azure Resource Manager templates and extensions.

The journey to the cloud provides many options, features, functionalities, as well as opportunities to improve existing governance, operations, implement new ones, and even redesign the applications to take advantage of the cloud architectures.
This video series was created in the context of the End of Support (EOS) motion for Windows Server 2008/2008R2 and SQL Server 2008/2008R2, with the target to highlight some of the migration options. The EOS program could be a good opportunity to start this process and it’s not only about the lift-and-shift or move your servers and forget about them, instead it could be the start of a modernization journey. As part of the EOS motion, Azure VMs running Windows 2008/R2 and SQL 2008/R2 on Azure and Azure Stack, offer 3 years of free Extended Support Updates. That means you can enable the same operational processes, use ARM templates, and use the infrastructure-as-a-service (IaaS) platform on both Azure and Azure Stack, to start this journey.
– Tiberiu Radu

Check out my Azure Stack Migration introduction video, which will give you a quick overview of migrating workloads to Azure Stack.

You can find the full playlist with the complete Azure Stack Migration video series on YouTube. 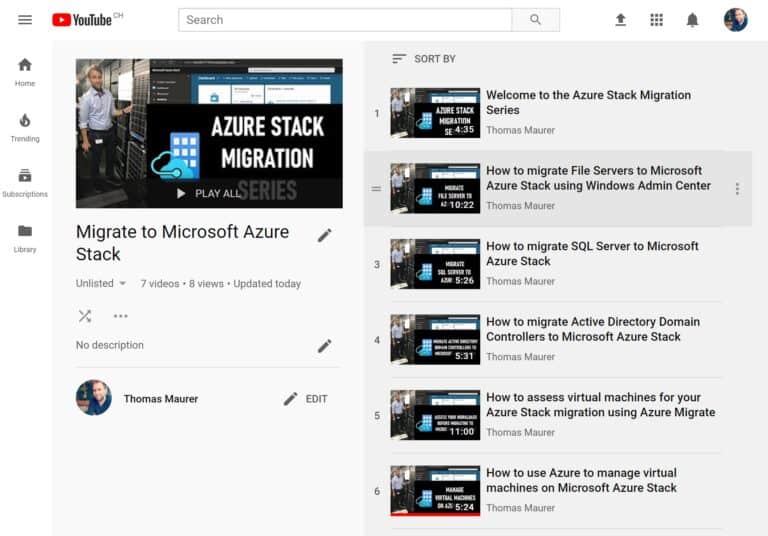 If you want to read more, check out my blog post on ITOpsTalk.com. There we have some detailed blogs on these videos. I also recommend that you check out the IaaS blog series from the Azure Stack team, which includes different features around running virtual machines on Azure Stack.

If you have any questions, please let me know in the comments.

Windows Server 2012 Hyper-V: How to clone a Virtual Domain Controller

Most of this was caused by the problem of USN (update sequence numbers).

“With Windows Server 2012, AD DS employs safeguards on virtual domain controllers hosted on VM-GenerationID aware hypervisors and ensures that the accidental application of snapshots or other such hypervisor-enabled mechanisms that could ‘rollback’ a virtual machine’s state will not disrupt your AD DS environment (by preventing replication problems such as a USN bubble or lingering objects). However, restoring a domain controller by applying a virtual machine snapshot is not recommended as an alternative mechanism to backing up a domain controller. It is recommended that you continue to use Windows Server Backup or other VSS-writer based backup solutions.”

Another problem was solved by Active Directory-less Cluster Bootstrapping. This basically removes the Active Directory dependencies during a cluster boot. This means you can boot up your cluster even if there is now other Active Directory server available during the boot process.

With the integration of the VM-GenerationID, Microsoft also created a new possibility which allows you to clone virtual Active Directory Domain Controllers.

How to clone a virtual Domain Controller

Grant the source virtualized domain controller the permission to be cloned. Add the source domain controller to the Cloneable Domain Controllers group. You can do this over Active Directory Users and Computers, the Active Directory Administrative Center or Windows PowerShell. In my case I added the computer object VirtualDC1 to the Cloneable Domain Controllers group. 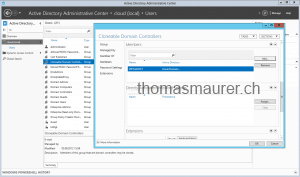 With Windows PowerShell this would be done like this.

In the TechNet manual step to would now be to run Get-ADDCCloningExcludedApplicationList, this will check for applications which are not evaluated for cloning. If your source domain controller is a new clean setup with any special applications you can skip this step. If you have installed any application which is listed when you run Get-ADDCCloningExcludedApplicationList you have to create a Custom DC Clone Allow List. You can do this with the following PowerShell command. 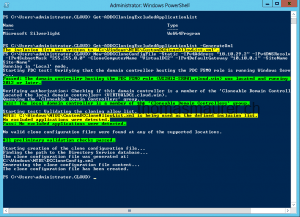 Note: The new domain controller has to be on the same site.

There are a lot of options you can configure your virtual server. For more information check out the TechNet page. 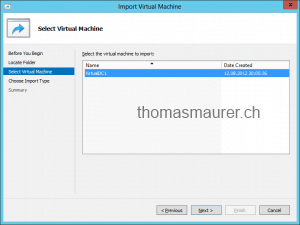 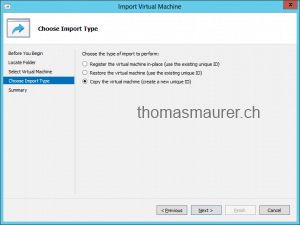 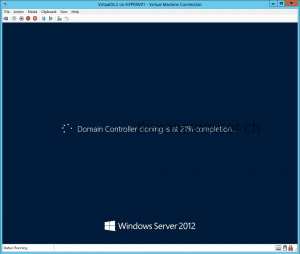 By the way Peter Noorderijk wrote a blog post called The future of a virtual domain controller on the Hyper-V.nu blog.