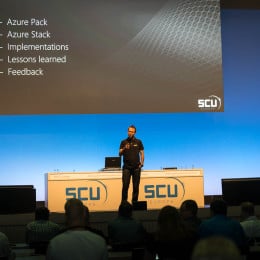 Great news today, some of my sessions I did at System Center Universe Europe 2015 in Basel, are now available on Microsoft Channel9. You can watch them directly on Channel9 with a lot of other great sessions from SCU Europe 2015, or you can just watch them here:

Nano Server the next generation of Cloud Server in your datacenter

In this session we will walk you through how Nano Server is changing the fundamental way we look at fabric Servers and workloads. Nano Server will change the way we build servers and solve fundamental challenges which we have encountered over the pact years embracing cloud fundamentals. Speaking together with Kristian Nese (Microsoft MVP)

With Windows Server 2016 Microsoft adds again exiting features to its Virtualization Platform. Learn in this session what Shielded VMs, Rolling Cluster Upgrades, Storage Spaces Direct, Hyper converged, PowerShell Direct, Windows Containers, and much more is and how you can profit from these new technologies. Speaking together with Carsten Rachfahl (Microsoft MVP)

Disaster Recovery, everyone talks about it – everyone claims they have it! But does it really work as expected?! Join us in the session about Azure Site Recovery, the business continuity service from Microsoft for all cloud platforms, on-premise – service providers – public cloud. You will learn how your company or customers can use ASR in their datacenter and which new scenarios have been added in the last 365 days, since we presented this topic at SCU 2014. Speaking together with Michel Lüscher (Microsoft)

Are ITIL and System Center BFFs?

In the modern world where organizations are facing new challenges to be more competitive, they are looking for better ways to improve the quality and efficiency of their IT Service delivery using the ITIL framework. Gain valuable insights and best practices on how you can adopt the ITIL framework to Microsoft System Center and OMS from real world experiences together with Savision, Jonas Lenntun, CEO and Solution Architect at Approved Consulting, and Microsoft MVPs: Robert Hedblom, Kristian Nese, Kevin Greene and Thomas Maurer. 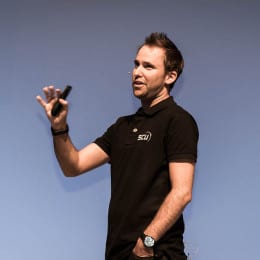 I finally recovered from the conference and found some time to write about System Center Universe Europe 2015. I live 20 minutes from the city center it was easy for me to get there. I already enjoyed some evenings before the event with some of the speakers and attendees in Basel. It is always a great chance to talk to other experts and share some experience with people you only met online or just see 2-4 times a year at conferences.

On Monday the SCU Europe 2015 finally kicked off and we had 3 days fully packed with System Center, Windows Server, Azure, OMS and other sessions, industry experts from around the world, networking and other parties. Three to five days which need a lot of your time and energy but which are totally worth it.

On Monday, I had the chance to be part of session hosted by Savision – Are ITIL and System Center BFFs? by Jonas Lenntun, Kevin Greene, Kristian Nese, Robert Hedblom and Thomas Maurer. The session moderated by Jonas Lenntun was a lot of fun, had some great discussions and interaction with the audience about ITIL and especially ITIL in the Cloud first world. 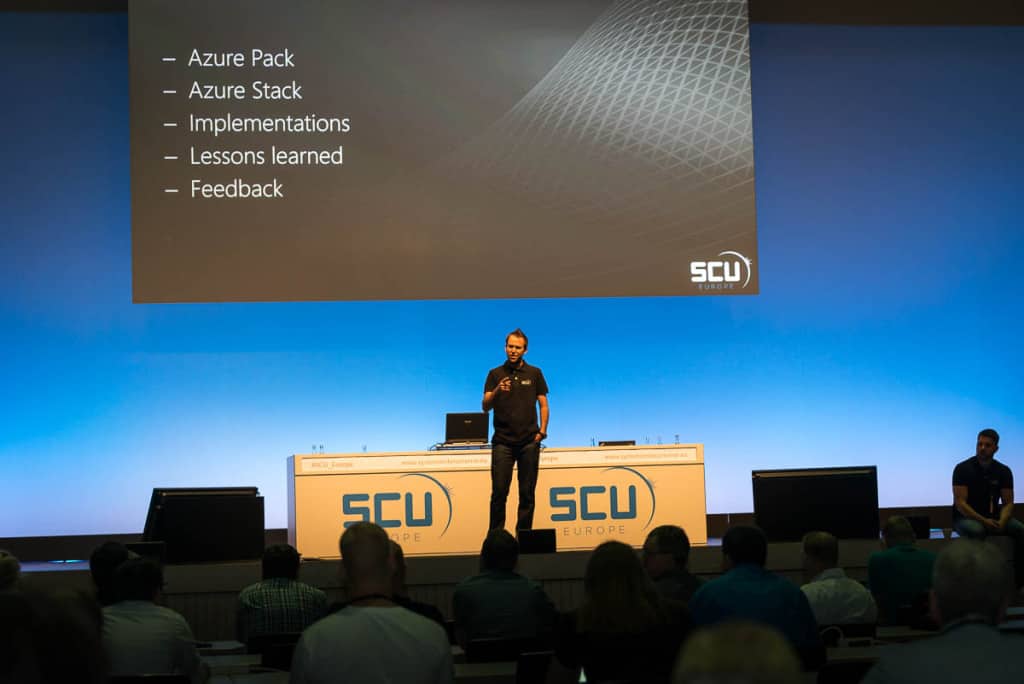 After the early morning discussion Kristian and me switched to our next session about Nano Server – the next generation Cloud Server in your datacenter.

Later in the afternoon I had the chance to talk with Carsten Rachfahl about What’s new in Windows Server 2016 Hyper-V.

After we enjoyed the attendees networking party on Tuesday evening, Michel Lüscher and myself started the day with our session about Microsoft Azure Site Recovery. 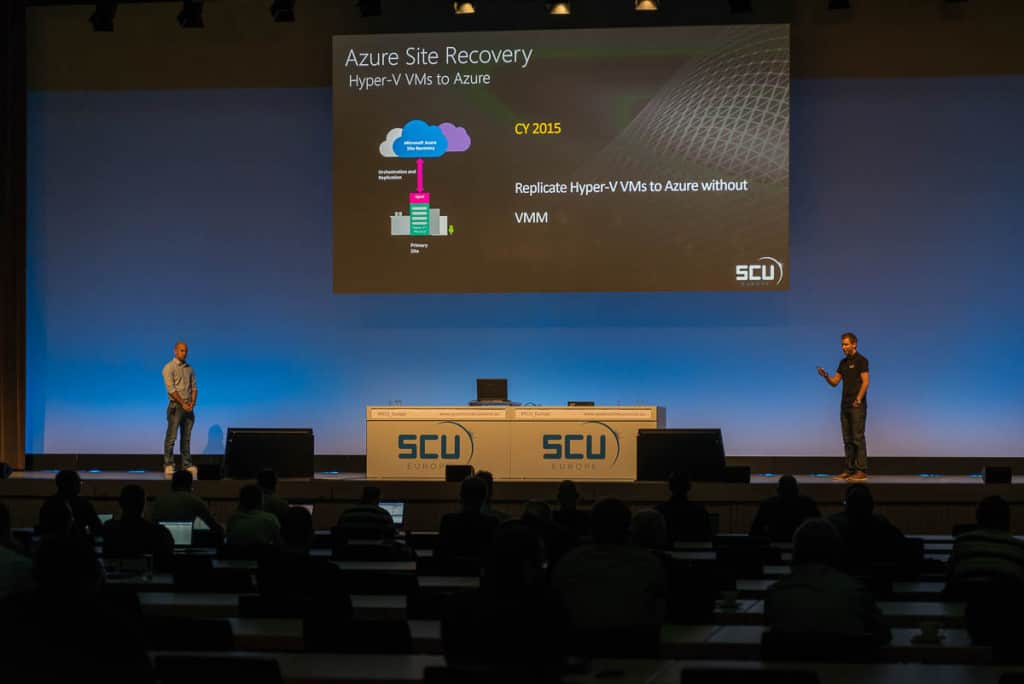 The session recordings not just for my sessions but also for all the sessions at System Center Universe Europe 2015 will be available in the next weeks. As soon as they are available I will post them on my blog, so make sure you subscribe. 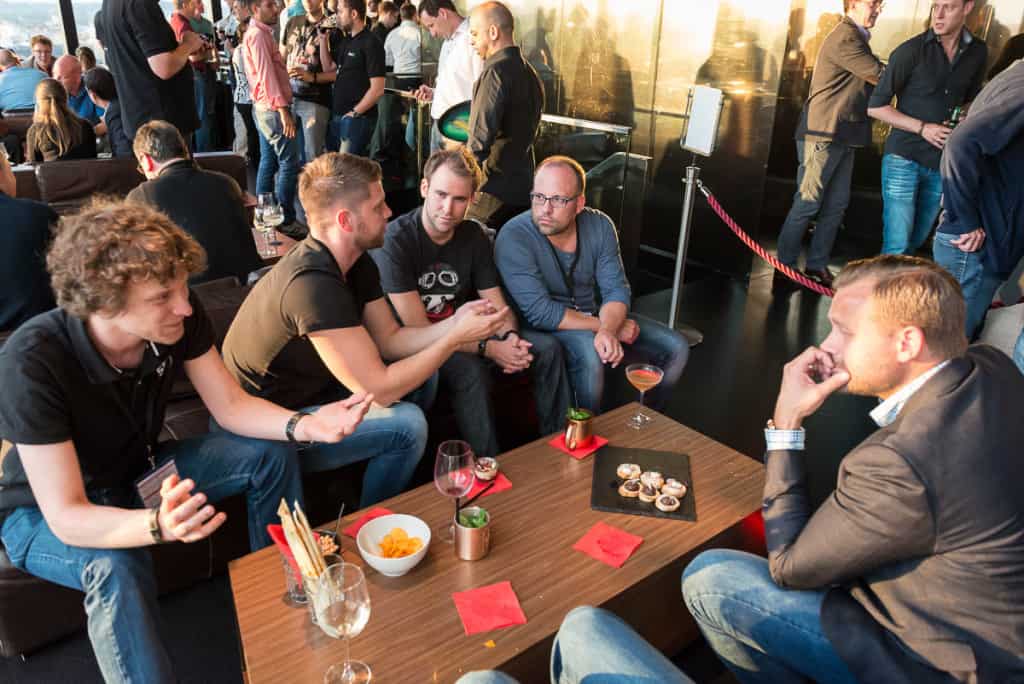 Other highlights were the official Speaker and Sponsor party on Monday, the closing note, where Marcel Zehner and Andre Pflaum presented how to automate and Manage your Tesla using PowerShell, System Center and OMS, and the closing party on Wednesday. The feedback I got so far is that this was an absolutely great event with awesome sessions, perfect organization and a lot of fun.  I really can’t wait to be back next year for System Center Universe Europe 2016 which will take place in Berlin next year. 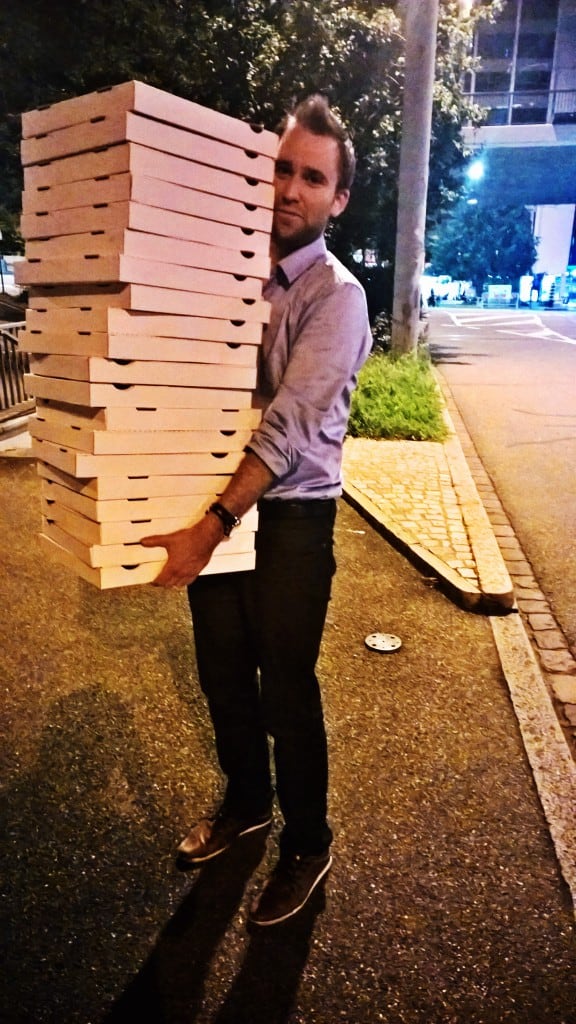 Fun Fact: I also started a second career as a pizza delivery boy