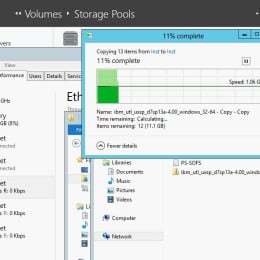 Another important part of SMB 3.0 and Hyper-V over SMB is the performance. In the past you could use iSCSI, Fiber Channel or FCoE (Fiber Channel over Ethernet). Now SMB 3.0 has a lot of performance improvements to make the Hyper-V over SMB scenario even work. But if you need even more performance you can use new feature which came with Windows Server 2012 and is of course also present in Windows Server 2012 R2 called SMB Direct, which supports the use of network adapters that have Remote Direct Memory Access (RDMA) capability.  Network adapters with RDMA offer some great enhancements such as very low latency, increased throughput and low CPU utilization since the functionality is offloaded to the network card.

At the moment there are different versions of network adapters with RDMA capabilities, currently these are iWARP, InfiniBand or RoCE.

Well SMB Direct or RDMA if oyu will is enabled by default, so Windows Server will make use of it when ever possible. But there are some things you have to make sure.

Jose Barreto wrote some great blog posts how you can setup your Hyper-V over SMB by using different RDMA network adapters. Checkout these blog posts:

Verify that SMB Multichannel is enabled, which confirms the NICs are being properly recognized by SMB and that their RDMA capability is being properly identified.

And as already mentioned in the SMB Mutlichannel blog post, you can verify the SMB connections:

And of course you have some great performance counters. 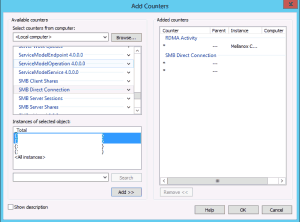 If you run some copy jobs you can see the amazing performance (if your storage is fast enough). Here you can also see a print screen with Mellanox ConnectX-3 Ethnernet adapters which are using RoCE in Windows Server 2012. You can see that you don’t see any TCP traffic in the Task Manager on the RDMA NICs. 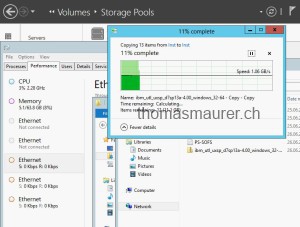 Get more information about SMB Direct on Jose Barretos blog SMB3.info or on Microsoft TechNet.