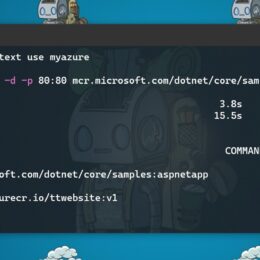 To be able to run ACI containers using the Docker CLI, Docker expanded the existing docker context command to support ACI as a new backend. To start using this new feature you will need to run Docker Desktop Edge version 2.3.2 and an Azure subscription. You can create a free Azure account with 12 months of free services, $200 credit, and over 25 services which are always free. 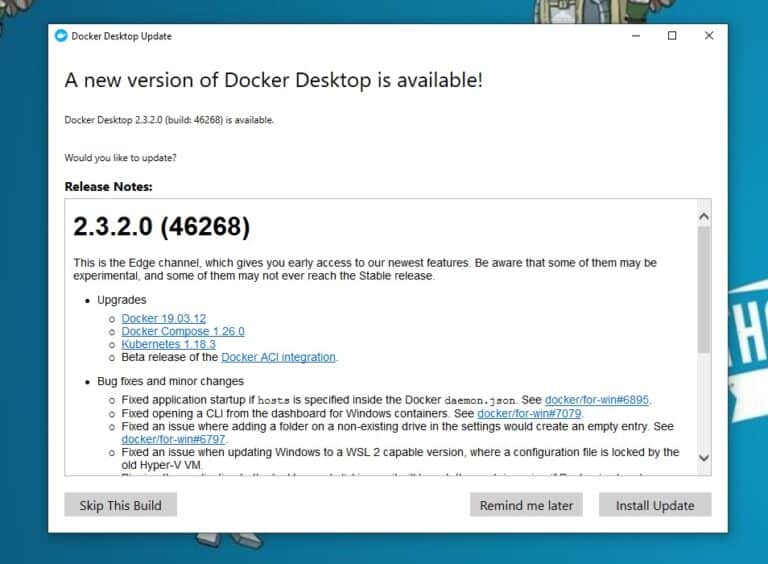 Now you can start your Docker CLI and login to Azure:

After you are logged in, you will need to create a new ACI context. You can simply use “docker context create aci” command and add your Azure subscription and Resource Group, or the CLI will provide you with an Interactive experience.

With “docker context ls” you can see the added ACI context.

Now you can switch to the newly added ACI context.

You can also see the running containers using docker ps.

This will also show you the public IP address of your running container to access it. In my example I used a demo container, however, you can also use your own container which you pushed to a container registry like Docker Hub.

You can also run multi-container applications using Docker Compose. You can find an example for that here.

This new experience is now available as part of Docker Desktop Edge 2.3.2 . To get started, simply download the latest Edge release or update if you are already on Desktop Edge and create a free Azure account with 12 months of free services, $200 credit, and over 25 services which are always free.

I hope this gives you a short overview of how you can use the Docker CLI to directly run Docker containers in Azure Container Instances (ACI). If you have any questions, feel free to leave a comment.

There are also many other great examples like running Docker Linux containers on Windows, using the Windows Subsystem for Linux 2 (WSL 2). 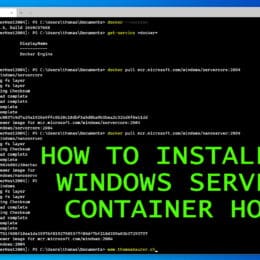 How to Install a Windows Server Container Host

If you want to learn more about the differences of Windows Server Semi-Annual Channel (SAC) vs. Long-Term Servicing Channel (LTSC), check out my blog post.

Set up and install the Windows Server Container Host

Since I am using the latest SAC release of Windows Server, the server is available as Windows Server Core only. This means I am going to use a tool called “sconfig” to set up my server for the first time. Of course, you can also use existing methods like unattend.xml files or PowerShell scripts to set up your server. 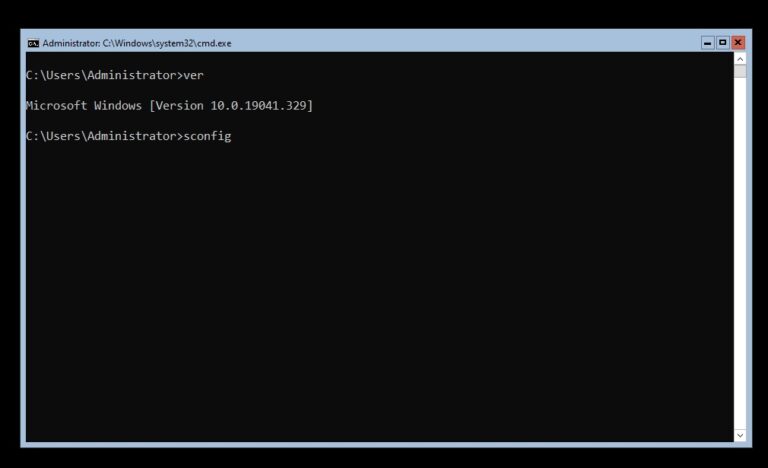 With sconfig, you can run all the simple configuration tasks to configure your Windows Server.

After these commands, you will need to restart the server.

If you want to learn more about installing Docker on Windows Server, check out Microsoft Docs. 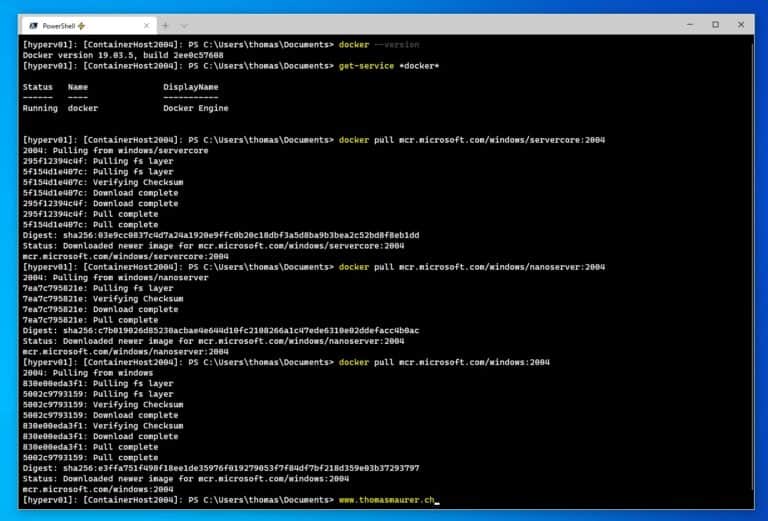 You can now use the docker client to manage your containers on your Windows Server, or you can also use the new Windows Admin Center Container extension, which was released a couple of weeks ago. 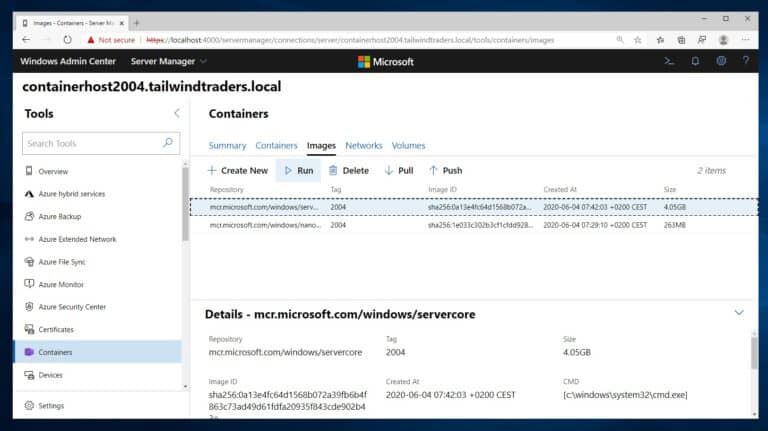 I hope this blog post gives you a great overview of how to install and set up a Windows Server container host. If you have any questions, feel free to leave a comment. 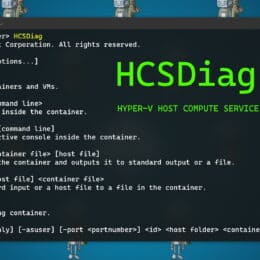 As you know, Hyper-V is not just a server virtualization software anymore. Today, you can find Hyper-V technology across different operating systems, products, and services, like Windows Defender Application Guard, Windows Sandbox, Hyper-V Containers, or many more. Thanks to Ben Armstrong from the Hyper-V team, I found out that there is a tool in Windows to troubleshoot these Hyper-V containers called hcsdiag.exe or Hyper-V Host Compute Service Diagnostics Tool. The Hyper-V Host Compute Service Diagnostics Tool (HCSDiag.exe) is available in Windows 10 and Windows Server 2019 if you have the Hyper-V roles or virtualization features enabled, and can be helpful to troubleshoot Hyper-V containers, virtual machines (VMs), Windows Sandbox, Windows Defender Application Guard, Windows Subsystem for Linux 2 and more. 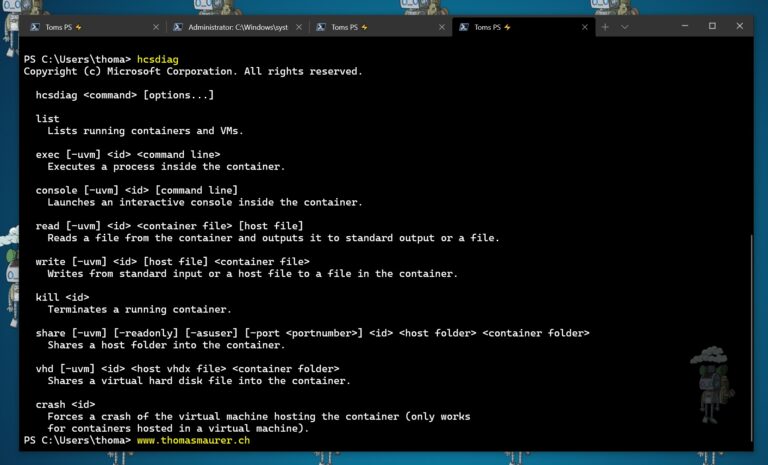 Let’s have a look at the HCSDiag.exe, which you can find in C:\Windows\System32. It provides you with a couple of different commands and options. However, keep in mind that not all features work with every type of container. Some features are limited to scenarios where the VM is being used under the same user context as the host, where it is all about protecting the host from the guest and not the guest from the host like in the server version of Hyper-V.

To install Hyper-V, check out the following posts:

I will give you some examples of how you can use hcsdiag.exe to interact with some of the Hyper-V containers. Now again, this focuses mostly on technologies like Windows Sandbox, Docker Hyper-V Containers, WSL 2, and similar features.

With the hcsdiag list command, you can create a list of containers and Hyper-V virtual machines running on the host. Including Windows Sandbox, Windows Subsystem for Linux 2, and Application Guard. 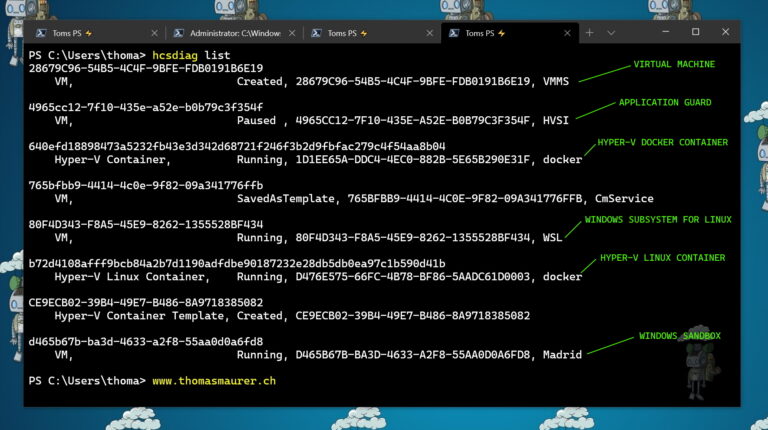 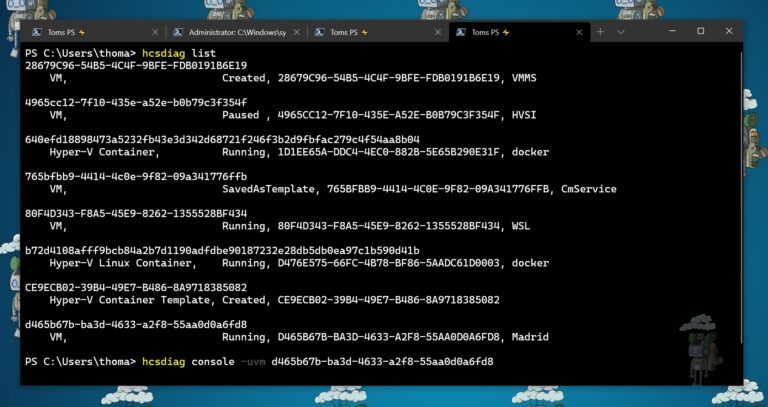 Here is an example where I am connected to a Windows Sandbox container using hcsdiag.exe. 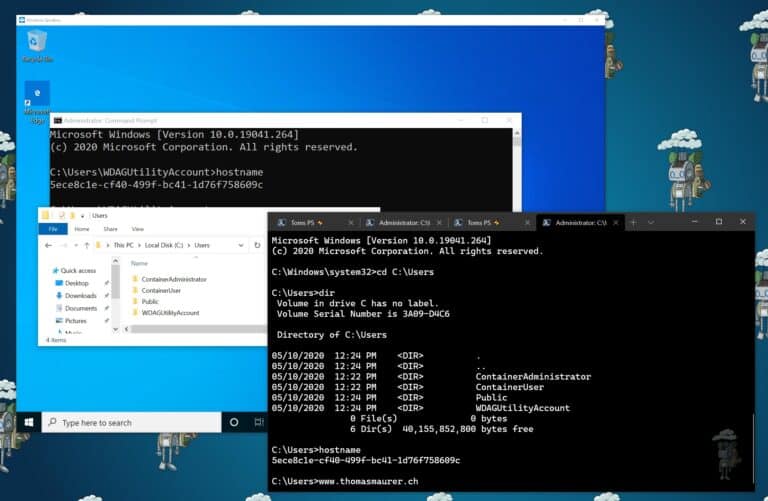 But that also works with Dockers container (Hyper-V containers) running Windows and Linux. 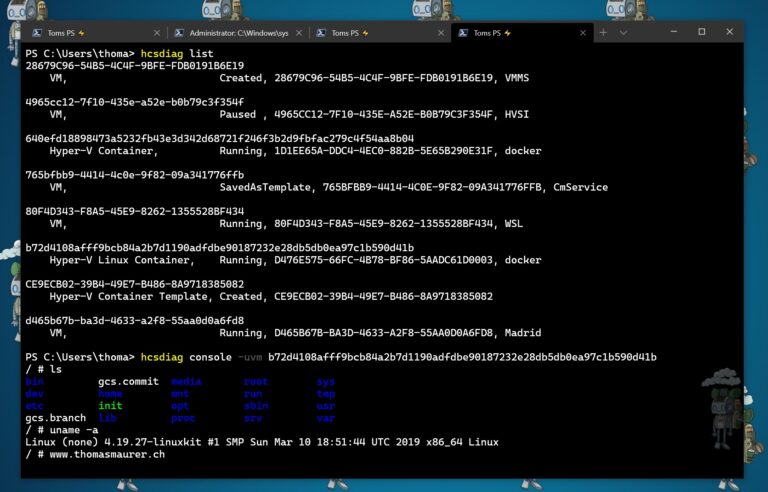 HCSDiag console provides you with an interactive connection to interact with the container.

The HCSDiag.exe also provides you with a couple of additional commands you can use. For example, the read command to read a file from the container and output it to the host or as a file to the host.

You can use the “share” command to share a host folder into the container or use “vhd” to mount a virtual disk file (VHD) file to a container. The hcsdiag kill command terminates a running container.

HCSDiag.exe – Hyper-V Host Compute Service Diagnostics Tool is excellent if you need to troubleshoot these Hyper-V containers, virtual machines (VMs), Windows Sandbox, Windows Defender Application Guard, Windows Subsystem for Linux 2 and more. If you have any questions, feel free to leave a comment. 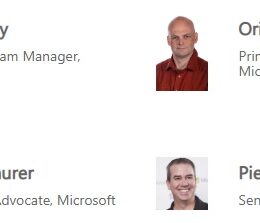 Join this four-part Windows Server webinar miniseries to learn tips and best practices for bringing the efficiencies and cost savings of Azure to your Windows Server workloads. Each 30-minute session includes demos and a live Q&A with Microsoft technical experts.

The Windows Server webinar miniseries – Month of Cloud Essentials sessions will focus on:

Intro to Windows Server Apps in the Cloud
June 4, 9:00 AM–9:30 AM Pacific Time by Jeff Woolsey 📅
Get an overview and explore resources to help you start running your Windows Server workloads on Azure.

How to Manage Windows Server Roles with Azure Services
June 11, 9:00 AM–9:30 AM Pacific Time by Orin Thomas 📅
Learn best practices to help improve security and scalability for apps by easily migrating Windows Server roles such as Active Directory, Windows File Server, and DNS to Azure.

Create Highly Available Apps with Azure VMs
June 18, 9:00 AM–9:30 AM Pacific Time by Pierre Roman 📅
Find out how to run business-critical Windows Server applications on Azure with consistent security, identity, and management features.

Modernize Windows Server Apps on Azure
June 25, 9:00 AM–9:30 AM Pacific Time by Thomas Maurer 📅
Explore hybrid cloud approaches for connecting your on-premises and multicloud environments to Azure with strategies that include containers.

I am looking forward to seeing you in the Windows Server webinar miniseries – Month of Cloud Essentials. If you miss any of the sessions, watch them on demand. You can register here.

If you have any questions, feel free to leave a comment. 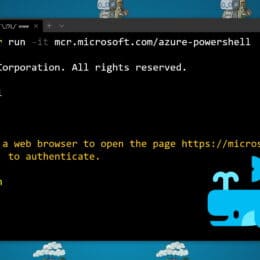 The team highlights the current scenarios: 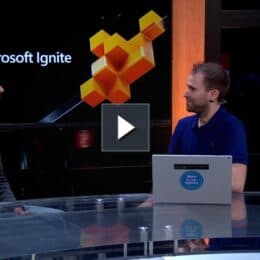 This is the last set of recordings of Microsoft Ignite Live stage recordings I am going to share. Today I am going to share two videos, in one I had the chance to speak with Craig Wilhite and Vinicius Apolinario about why you should care about containers and how to get started. In the second one, I spoke with Ben Armstrong from the Hyper-V team about some of the great fun bits the team is doing.

A lot has been said about containers recently, but why should you care? Containers are not an “all or nothing” situation and understanding when they can be beneficial is key to a successful implementation. Come and learn from the containers team how you can get started with this technology and some tips and tricks that will help you with your containerization journey!

Ben Armstrong, Principal Program Manager on the Hyper-V team talks about some of the challenging, interesting, quirky, and just fun changes that have happened in virtualization over the last year.

I hope this gives you a quick look at some of the fun parts the Hyper-V team is doing with containers and Hyper-V. You can check out the following links to get more information:

Microsoft Ignite 2019 was a lot of fun, and you can also watch my session about Hybrid Cloud Management at Microsoft Ignite. If you have any questions, please let me know in the comments. 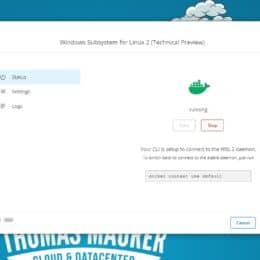 Docker Desktop WSL 2 is currently in the edge version of Docker, and it also requires the Windows 10 Insider Preview builds for Windows 10 version 2004. That means you should only use for not production environments.

WSL 2 introduces a significant architectural change as it is a full Linux kernel built by Microsoft, allowing Linux containers to run natively without emulation. With Docker Desktop WSL 2 Tech Preview, users can access Linux workspaces without having to maintain both Linux and Windows build scripts.

Docker Desktop also leverages the dynamic memory allocation feature in WSL 2 to greatly improve the resource consumption. This means, Docker Desktop only uses the required amount of CPU and memory resources, enabling CPU and memory-intensive tasks such as building a container to run much faster.

You can find more information about the Tech Preview here.

To run the Docker Desktop WSL 2, you will need to set up the Windows Subsystem for Linux 2 (WSL 2) first. You can do that using the following guide, or follow these steps:

Install Windows 10 Insider Preview build 18932 or later. WSL 2 will be available in Windows 10, version 2004. Today, you will need to install the Windows Insider Slow ring build.

Download WSL Linux distribution based on Ubuntu 18.04 from the Microsoft Store. You can read more about Linux on Windows 10 here. The distribution needs to be set as the default WSL distro.

Make sure that the WSL distro is running in WSL 2 mode. You can check the list of distros installed on your Windows 10 machine, with the following PowerShell command:

To set the distro to WSL 2, you can run the following command. Change the name of the distro:

To find out more about installing WSL 2, check out the Microsoft Docs page.

You also set WSL 2 as the default for all Linux distros:

How to set up Docker and WSL 2 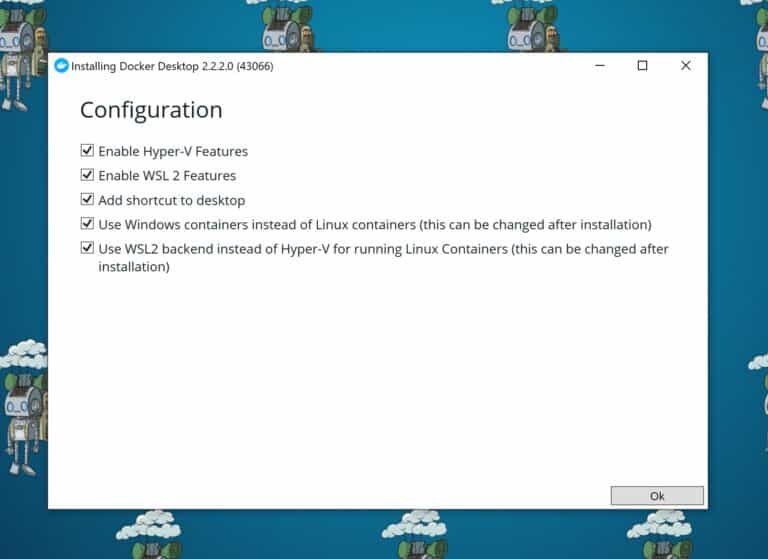 Run the installation wizard, and after a successful installation, the Docker Desktop menu displays the WSL 2 option. You can select WSL 2 from that menu to start and configure the daemon running WSL 2. 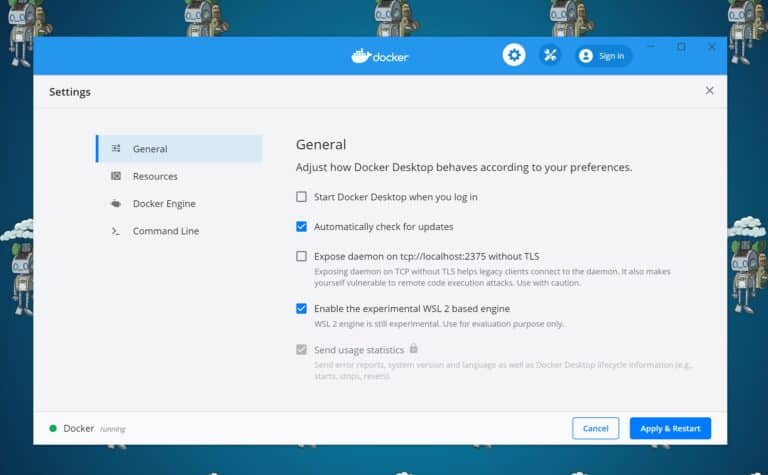 Now you can run a Linux container using Docker Desktop for Windows, running on Windows 10 using the Windows Subsystem for Linux 2 (WSL 2).

You can now also do crazy things like run SQL Server on Linux in a Docker container on Windows 10.

I hope this gives you a good overview of how you will be able to run Linux containers on Windows in the future. Again this is still a Tech Preview, and we might see many changes to that feature. If you want to know more, read the full blog post on the Docker page. Also, check out the current Linux Container on Windows documentation. If you any questions, feel free to leave a comment.