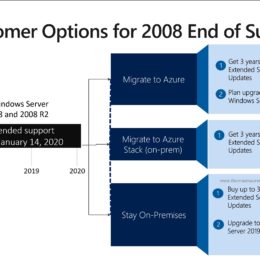 SQL Server and Windows Server 2008 and 2008 R2 will both be out of extended support within the next 12 months (detailed dates below). This means if you have these versions, you’ll need to migrate to newer versions of SQL Server or Windows Server or buy Extended Support soon to maintain support and receive security updates and fixes. Buying Extended Support is not cheap. Customers with active Software Assurance or subscription licenses can purchase Extended Security Updates annually for 75 percent of the full license cost of the latest version of SQL Server or Windows Server. A lot of customers should start migrating to newer versions of these products to avoid these extra costs.

The great thing about this is that you can also combine this with your Azure Hybrid benefits, to use your SQL Server and Windows Server on Azure with your on-premise licenses.

If you are thinking to migrate to the cloud, this new option will bring down costs for you. However, not everyone is fully ready to move all their servers to the public cloud. You might still need or want to run some servers on-premise in your datacenter. This will leave you with buying Extended Support or what a lot of people don’t know; you can also run your SQL Server and Windows Server 2008 and 2008 R2 on Azure Stack and get Extended Security Updates for free since it is Azure!

This is great, especially since Azure Stack also comes with great IaaS capabilities. And if you are thinking about using Azure in the mid-term, Azure Stack provides you with Azure capabilities, but still allows you to stay in your datacenter.