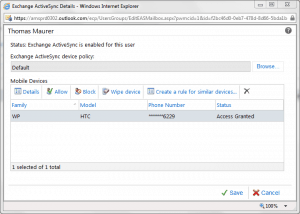 Now I am still working with Office 365. I am still try to test all the features and also the support for mobile devices like the iPhone or Windows Phone 7. As a Windows Phone 7 developer I could get the beta for the next update of Windows Phone 7 called Mango. Now Mango will support Office 365. You can simply add your Office 365 account on your phone and this will connect you to Exchange Online and SharePoint Online.

What is missing in first beta of the Windows Phone 7 Mango update is Lync, but Microsoft is working on that.

This blog post shows you how you can verify your domain for Office 365. You can add your own domain to your Office 365 account. If your domain is hosted at Genotec, you can simply create the DNS records for your domain with the DNS editor Genotec provides in the Hosting Control Center.

Under Domain names, yourdomainname.com you can create a new TXT entry to verify your domain. For example:

After you have verified your Domain you have to add some other DNS Records for Exchange and Lync Online to work.

And here the DNS Records for Lync Online:

Remember to add the dot at the end of hostnames.

I hope this gives you an overview of how you can verify your domain for Office 365.

Microsoft released a developer beta of the next Windows Phone update codename “Mango” last week. Mango brings a lot of cool new features to the Windows Phone platform like Facebook and Windows Live Messenger chat integrated in the Messaging hub, Internet Explorer 9 and a lot of other improvements.

One of the smaller improvements is the capability to use SharePoint 2010 without a UAG (Forefront Unified Access Gateway). This will alow you to use Hosted SharePoint products like the offering from Genotec. Now there are a lot of differences between this plans which are described on the Office365 website. But there is something I just realized after I used Office 365 the first time. If you want to use Office 365 with your own domain, Microsoft has two ways to do this.

With Plan P you have to delegate all the DNS configuration to Microsofts DNS servers, which means your DNS servers for your domain, will be somednsserver.microsoft.com. Microsoft offers you a simple UI to create additional CNAME and A records. And all your MX records and A records which are used by Office 365 will be created automatically. This makes it very easy, but even for some small businesses this does not work, because they may need more than just some simple additional A records or CNAMEs.

Powershell: How to connect to Office 365 with Powershell

You can simply manage and administrate Office 365 from your Powershell prompt or with your own Powershell scripts.

Here is how you can connect to Office 365 with Windows PowerShell:

You can open a new Session:

Now join the session with:

To close the Session:

Now if you join the PS session with Enter-PSSession you can now work online and run commands like Get-User. More about working with Powershell and Office 365 in the next posts.

In the last days I started to work with the Microsoft beta of Office 365. After testing it for a while I think this could be a great solution for small & medium businesses. And its a really hard competitor to Google Apps. There are a lot of advantage which Office 365 has agains Google Apps and I think because it is a Microsoft Solution for a lot of companys this is the better way to go, if they already used Microsoft Products or have a Microsoft enviroment.

In the next few weeks I will post some blog post about how to use Office 365 and some Powershell How To posts. 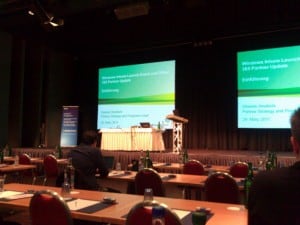